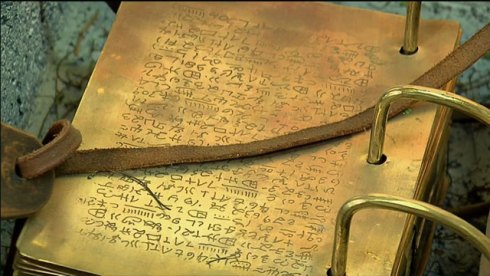 Remember all the times that the ancient Book of Mormon prophets explained how easy and fun it was to engrave their history and teachings on the plates?  I don’t.  What I do remember is all the times that they reminded us how horribly difficult and awkward it was to engrave anything on the plates.  It wasn’t like they could just grab a pen and jot down some thoughts at the end of the day that would stand the test of time being passed down from generation to generation and then spend 1,400 years in a cement box buried in the side of a mountain. The ancient prophets had to “labor diligently” to engrave anything that they really wanted us to have as part of our record.  Jacob (Nephi’s brother) told us very plainly that “I cannot write but a little of my words, because of the difficulty of engraving our words upon plates”.1

Engraving is much different than writing.  The ancient prophets could write on scrolls, papers, banners, fabrics, flags, skins, clothing, etc. and whatever other materials they had available – but to engrave anything on the plates or to make sure that their words would be heard – they had to “labor diligently.”   I think of them maybe tracing out what they want to write with a pen/pencil/paint/ink or some other marking device, and then following over that same line 432 times with a chisel or some other type of tool so that it becomes indented or etched into the plates.2

It’s no different for us today right?  We can type our teachings or words on a computer, tablet, phones, or we can just talk into a recording device while sitting on the couch.  Those methods are very easy,2 yet if we are honest (given our current society) some of us would probably consider actually writing with a pen or pencil on a piece of paper to be the same difficulty today as the ancient prophets considered the engraving process back then.  After all, sometimes I complain (to myself) about how difficult it is to “write” my thoughts for this blog – and all I do is click the keyboard.   But, if we want those words to stand the test of time – we have to “labor diligently”, and it has to be more important to us than the many other things that take up our time.

The plates were extremely important to all of the prophets – and most of them repeatedly petitioned the Lord that he would allow their words (the same words and testimonies that they had labored so diligently to engrave) to be retained, kept, and sent forth to their posterity. Since I referenced Jacob earlier – we’ll review his testimony in particular.  Right after he indicated how hard it was to write upon the plates (Jacob 4:1) – he wrote “whatsoever things we write upon anything save it be upon plates must perish and vanish away; but we can write a few words upon plates, which will give our children, and also our beloved brethren, a small degree of knowledge concerning us, or concerning their fathers—Now in this thing we do rejoice; and we labor diligently to engraven these words upon plates, hoping that our beloved brethren and our children will receive them with thankful hearts, and look upon them that they may learn with joy and not with sorrow, neither with contempt, concerning their first parents.” (Jacob 4:2-3).

Our children are the plates.

I am a parent, and I have been one long enough to know that if I want anything that I say or “write” upon (or to) my children to stand the test of time – or if I want the words I write or teach to outlast being handed down from generation to generation, and perhaps 1,400 years in a cement box (or even last through the day while they are at school as they grow up in the latter days) – those words need to be engraven and not just written lightly.  Pencils, pens, and paintbrushes aren’t enough to outlast the world.  Engraving is the only way it can be done – and suddenly we understand exactly what Jacob meant when he said “I cannot write but a little of my words, because of the difficulty of engraving our words upon plates”.  Kids aren’t paper – they are plates (not to be read “paper plates”.  They may start out as paper, but as time goes on – they become plates, and we need to start the engraving process early enough to be sure that what we are writing is becoming engraved as they grow into plates.

In Alma 37, Alma entrusts the plates to his son Helaman, with some parental guidance; let’s read it thinking about our own kids as the plates: “now, my son Helaman, I command you that ye take the records which have been entrusted with me; And I also command you that ye keep a record of this people, according as I have done, upon the plates of Nephi, and keep all these things sacred which I have kept, even as I have kept them; for it is for a wise purpose that they are kept… And now behold, if they are kept they must retain their brightness; yea, and they will retain their brightness; yea, and also shall all the plates which do contain that which is holy writ4 (Alma 37:2-5).

To summarize and drive this point home – I will share a passage from the Testimony of the prophet Joseph Smith.  It is a classic passage outlining the charge he received from Moroni, who was the final author of the Book of Mormon and one of the amazing custodians of the plates.  Imagine with me the care and love Moroni had for these sacred records – and then think of yourself as Joseph and your children as the plates when you read this charge from someone who definitely means business before handing them over.

“At length the time arrived for obtaining the plates… the same heavenly messenger delivered them up to me with this charge: that I should be responsible for them; that if I should let them go carelessly, or through any neglect of mine, I should be cut off; but that if I would use all my endeavors to preserve them, until he, the messenger, should call for them, they should be protected.

“I soon found out the reason why I had received such strict charges to keep them safe, and why it was that the messenger had said that when I had done what was required at my hand, he would call for them. For no sooner was it known that I had them, than the most strenuous exertions were used to get them from me. Every stratagem that could be invented was resorted to for that purpose. The persecution became more bitter and severe than before, and multitudes were on the alert continually to get them from me if possible” (Testimony of the Prophet Joseph Smith – found in the beginning of the Book of Mormon).

As parents, we have the same charge with our children.  We are responsible for them and we must keep them safe.  We must realize and acknowledge that “every stratagem” and “the most strenuous exertions” are currently being used and invented by the multitudes to get them from us.  And, we must remember that we are tasked with using all of our endeavors to preserve them.  Not most or some or part – all.

Let us all review the obligation that we have as parents, “to rear our children in love and righteousness” – and to teach them and engrave upon them the things that are of the most worth.

2 In Alma 5:14 we are asked (by Alma) if we have “received his [Christ’s] image in our countenance?” He then asks several other questions that encourage us and give us insight into how to go about “receiving” his image in our countenance (exercising faith, looking forward, doing good works, remembering, etc.).  Then, in verse 19 he asks if we can “look up, having the image of God engraven upon [our] countenance.”  In other words, the process of receiving Christ’s image upon us repeated every day and every week and every month and every year leads to his image being engraven upon us (see also 1 Ne. 21:16 and Jer 17:1).

3 Easy doesn’t mean we all do it.  It just means that it doesn’t require strenuous effort and physical labor (I am not considering a sore hand from writing physical labor).  Much of what can be termed “diligent labor” is mental, spiritual, emotional, and requires our time, our focus and our intent along with physical exertion.  Indeed, there may be a claim that the labor that requires full mental and emotional buy-in might be more difficult than the physical labor.  I think that if we think this way, we are beginning to understand.

4 All of Alma 37 can be read thinking of yourselves or your children as the plates for insight.  See also Mormon 9:31-34 for additional points to think about with parenting (and the plates).

2 thoughts on “Engraving upon plates”