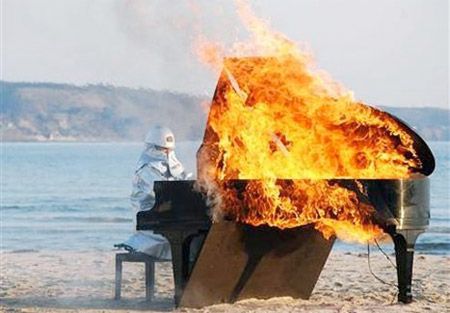 About 10 years ago my family decided to “take our talents” from Alta ski resort to another resort for a skiing trip. It was my first time officially snowboarding and I was pumped! Included in my gear was my MP3 player and headphones. After only two times down the mountain I felt like I was pretty much a pro. I was feeling all sorts of overconfident and somehow honestly felt my “training” was complete. So, the third time up the mountain I decided “this hill is for sissies I’m going all the way up to the top”. As I sat at the top looking down the mountain I was about to shred, and at all the punks I was about to show up, I put my headphones in and blasted my favorite band at the time: Sum 41.

The surge of noise, sound, speed and chaos hit my eardrums which triggered my adrenals to start pouring, literally pouring adrenaline into my body. It was like a match had been dropped into a tanker filled with lighter fluid and firecrackers, driving by endless fields of dry parched grass on a windy day. Mix that with male hormones and a faulty sense of self confidence and your neck deep in “hey y’all watch this” territory. I felt like I was bullet proof! I was overconfident, under skilled, out of my league yet completely drunk with adrenaline. I had two options, take out the headphones, calm down, and think logically… or absolutely dominate and destroy that mountain by tearing down it faster than any human or even snow mobile had ever done before. Often times lessons in logic are only learned from illogical choices. Or in other words… we all know which option I chose.

Most of my stories have a happy ending… this isn’t most of my stories. I was just about to break the sound barrier when my board edge “caught” the snow and my takeoff into orbit started. As I was flying through the air I realized I had made a massive mistake and I knew I was totally hosed. I remember as I was approaching my “final decent” after the drinks were served during my flight, I was powerless to change my position due to the momentum I had built up prior to my takeoff. Finally, the unavoidable impact came. The entire responsibility of bringing my speeding body to a halt was given to my face as it plowed deep and  relentlessly into the snowy mountainside like an anchor raging through the ocean in an attempt to slow down a giant runaway ship in a ferocious windstorm. Eventually, my body did finally come to a stop. I was happy and quite surprised to find my face was still on my face. That day, a lesson had been learned. That my good friends, is what we call a reality check.

So what does the story of my face leaving a crater and mile long trench down a mountain have to do with anything? Plenty. Today, my choice of music is very different. In fact, it’s completely opposite. I love Church music. So does that mean my days rocking out to music are over? Does that mean the days of being completely amped and drenched with adrenaline from music are over? Does that mean I can’t blast the tunes ever again? Behold, I say unto you “nay”.

The difference in being completely amped up by Sum 41 and the Mormon Tabernacle Choir are polar opposite. Sum 41 “forced” a false confidence that was placed entirely in myself which a recipe for failure every single time. It made the untrue seem true, which of course was proven incorrect in the end. However, the powerful music and message portrayed by one of my favorite power hymns “allows” a powerful confidence to be built in Christ which builds my faith and actually strengthens my testimony. A recipe for success every single time. It simply solidifies the truth as truth, and simply strengthens my faith in that truth which is eternal and unchanging.

Music to me is extremely influential. I think we often overlook how awesome our hymns are! Our hymn book is totally crammed with some of the most awesome power ballads you have ever heard. Granted, they are usually played slowly, as to bring the Spirit in. However, the Spirit is felt multiple different ways, and for me personally, my favorite way is when it’s Powerful, Epic, Overwhelming, Undeniable, and Strong! I love when powerful hymns are played almost resulting in the piano catching fire due to an overload of pure awesomeness! It’s how I love to hear certain hymns played or sang! I love the power and presence they can bring under those conditions. There’s nothing quite like a nice Spiritual beat down which makes you think “yes sir, may I have another”! It makes me wonder if that’s how the Angles sing to Christ in Heaven or how we reacted when we learned we would all get the chance to come to Earth with physical bodies.

I’m not saying this method of “rocking out” to feel the Spirit is for everyone. I’m also not saying there is not a place for quiet, calm, reflective soft hymns, I’m just trying to point out how absolutely POWERFUL many of the songs in our Hymn Books are and that we can still “rock out” in a totally productive way! In fact, if you haven’t in a long time, I want to ask you, right now, take 15 minutes, thumb through the Hymn Book and start reading the lyrics to the songs. Really look into their meaning, the passion, their energy and the message that is portrayed in them. The unmistakable truth they are filled with. It may help you to see the Hymns in whole new light. I know it’s helped me. Plus, who doesn’t like rocking out?

Here’s a few of my faves you could start with:

The Spirit of God, Redeemer of Israel, Praise to the Man, Come, Come Ye Saints, Battle Hymn of the Republic, How Firm a Foundation, I Believe in Christ, Let Us All Press On, Onward Christian Solders, Called To Serve, Carry On, Who’s on the Lord’s Side Who?, Ye Elders of Israel and the list goes on and on and on and on…