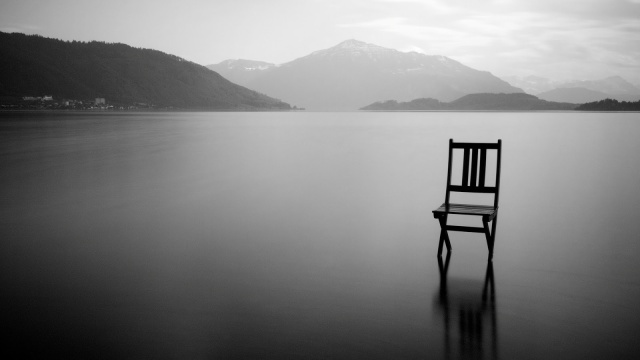 Several years ago when I worked for a local gas company as a meter reader, with the job of reading meters manually (that means I walked around and wrote numbers down).  One day, I had parked the truck on the curb but left my door open (probably so I could still listen to the radio as I walked to the meter and back) while I worked.  About the time I finished writing the numbers down I heard the all too familiar sound of a man-eating dog.  After being born into the world pre-programmed to be petrified of dogs (gift of the pre-existence), 4 years as a paperboy, 2 years as a missionary in Brazil, and 4 more as a meter reader, there was no chance for negotiations.  So, naturally I ran.  In that moment, I ran faster than Usain Bolt has ever run – guaranteed.  In the .3 seconds that it took me to travel the 100 feet from where I was to the vicinity of where the truck was parked I managed a glance at the beast that was seeking my life.  It was pretty much a werewolf with fangs and claws like a T-Rex.  I was doomed – or so he thought/hoped.  As he closed in on me something truly amazing happened; with about 10 feet to go I knew there was not time to stop, get in the seat, and shut the door – so I had to do it all in one fluid motion.   I leapt, flew 10 feet in the air, and during that graceful move I contorted my body into a sitting position, and at exactly the same time I twisted my body sideways so that I was literally flying through the air in a seated position – which allowed me to gracefully land perfectly into the seat of my truck.  This is amazing on its own, but I need to add one more detail.  During this acrobatic motion, I also was able to grab the door handle and swing it shut with me (as if it were part of my own body) and in the precise instant that I landed on the seat, the door shut with me leaving the werewolf hound on the outside looking in – amazed and angry at what had just happened.

The moment I was safe in the cab of my truck – I looked around in a desperate hope to see if anyone had witnessed that most graceful move in the history of graceful moves.  I searched the streets, neighboring windows for anyone, anywhere, anything that could have witnessed this event – and I was met with crickets.  Nothing.  Complete and utter silence.  Nobody saw it, nobody was cheering for me, nobody was shaking his or her head in amazement.  Just me and the carnivorous werewolf who was cheated out of his lunch – and even he didn’t linger in awe.  I was so disappointed that I didn’t have anyone to witness my feat.  In what may very well be the most athletic and awesome move that has ever been performed by anyone, anywhere (including the dunk contest, figure skating, and all those trampoline competitions or chess matches) I was left completely on my own, with not a single soul even knowing about what a great thing had just occurred. And to pour salt in my emotional wounds, the expectation that I would still read the rest of the meters on my route during my shift remained in full force.  Life is cruel.

Sometimes the most amazing things are accomplished without a single human eye to see it or a single ear to hear it.

We are all asked to do a lot of things.  Hundreds and hundreds of things that can and will help us become better.  In addition to all those things, we are required to do things every single day like go to work, sleep, shower, rest, use the bathroom, shop for groceries, mow the lawn, wash clothes, fold clothes, help the kids with homework, make dinner, clean dinner, wash the dishes, clean the house, teach our kids to be nice to other people, teach our kids the gospel, teach our kids what the world is really about just to keep from living in a garbage can down by the river.  In my house there are no bleachers, there are no film crews and cameras.  None of these amazing and important things are done in front of an audience.  In fact, all of these things, the very things we are asked to do, are done in obscurity, with absolutely nobody watching.  They are done in silence.  Don’t believe me?  Ask your wife.

I’d also like to make a connection that I think is rather amazing.   First, we need to understand or remember that these things – the every day things we do in complete obscurity when absolutely nobody is watching – are the very real ways and means for each of us to actually put on the armor of God, and to help prepare our children prepare themselves with that same armor.  Remember that the armor of God includes several defensive tools and a single offensive tool, and when united together this armor can be described as our “weapons of war”.

With that understanding, let’s read the following passage in Alma 55 (verses 16 and 17):

…and Moroni had prepared his men with weapons of war,… while the Lamanites were in a deep sleep and drunken, and cast in weapons of war unto the prisoners, insomuch that they were all armed; Yea, even to their women, and all those of their children, as many as were able to use a weapon of war, when Moroni had armed all those prisoners; and all those things were done in a profound silence.

This passage is so amazing when you consider yourself as Moroni and the prisoners as our children, or those whom we love and have responsibility for.  While the world is “in a deep sleep and drunken” it is our responsibility to “cast in weapons of war unto the prisoners” until they become “armed”.1  This includes the women, the children, and “as many as are able to use a weapon of war.  And maybe the best part of all – “those things were done in a profound silence”.

The word profound means “pervasive or intense, thorough, complete”.  Think of the intense meaning then, of a profound silence.  Not just a lack of noise, or even a quiet situation; but a deep and intense, pervasive silence.  This is the acclaim that we are slotted to receive for the hard work that the Lord has asked us to do.  This is the applause that we can expect from the world while we are trying against all rational thought to read (and understand) scriptures with our young children at 6:30 in the morning.  These are the sounds that we can expect to encounter while we are busy arming ourselves against the loud and boisterous world.  Profound silence.

For some context, let’s remember that some of the most amazing things in the entire history of the world have happened in a profound silence – and yet have the most deafening results.  The atoning prayer and resurrection of Jesus Christ were done in what may be considered the most profound yet reverberating silence of all.  Our small, simple, and weak efforts every single day to arm ourselves and our children with “weapons of war” that are often done in a profound silence, will be the very real means by which  “all the poor and meek of the earth… may become a great mountain and fill the whole earth.2 with power, light, love, joy, and peace.

So, 14 seconds from now, when you are wondering why the world doesn’t celebrate your every accomplishment to follow the savior, or you can’t figure out why the blessing dump truck hasn’t arrived at your door because you read your scriptures today, just remember that the quietest acts of goodness may end up being the loudest of all – and that Jesus Christ came to earth, lived as a man, suffered unspeakable things, and performed the most amazing and infinite act of pure love that will ever be known – “and those things were done in a profound silence”.

1 It is also interesting to consider that we cannot “cast in weapons of war unto the prisoners” if we don’t have any weapons for ourselves.  Consider the parable of the 10 virgins in this light.

3 thoughts on “A Profound Silence”