In honor of the Easter season, and in the spirit of recognizing its significance, I’d like for us to think of how much the Savior was able to accomplish in such a relatively short amount of time. His ministry started when he was 30 years old, and lasted only 3 short years, culminating in his crucifixion and resurrection. 3 years to change the course of human history. We can also break those 3 years down even further, His most lasting and meaningful moments could be highlighted in 3 different days or events.

Three greater days have never passed before the eyes of men,
In all of God’s created worlds, from when all time began.
They came in chaos, strife, and pain, with peace left far behind,
the crucial fulcrum of mankind’s meridian of time..

First of three, that night foreseen, His sacred supper blessed.
The Christ, betrayed, retired to pray, find peace, and quiet rest.
But peace came not that night at all, but blood from every pore,
As our Brother, all alone, atoned, our sins He bore.

While crushed with pain, for sins not his, He prayed on bended knees,
an angel came to comfort give, His strength in hour of need.
He drank the bitter dregs from cup o’erflown with sin of man.
His love for us the reason for fulfilling Father’s plan

First darkened night of storm and quake then fear from nature’s wrath,
For man had seen the Son of God, yet heeded not His path,
And Christ alone, bore all the weight of justice through that night,
And Evil thought its victory won, delighted in His plight!

Through deep humiliation’s path, He walked, but did not speak,
He bore our burdens, felt our pain, passed through our trials bleak.
And then descended far below what man could take, and live.
So he could succor us in need, true empathy He’d give.

He hung upon the cross, and felt completely left alone,
For God the Father, left him in that moment to atone,
He drank the cup, fulfilled his calling in our Father’s plan
The single greatest moment in the history of man!

God’s anger at the wickedness of man was then displayed,
as lightning, thunder, quakes, and storm brought forward man’s dismay,
But soon the darkened skies of angered God would be replaced,
By dancing sunbeams in the garden, welcoming the day. 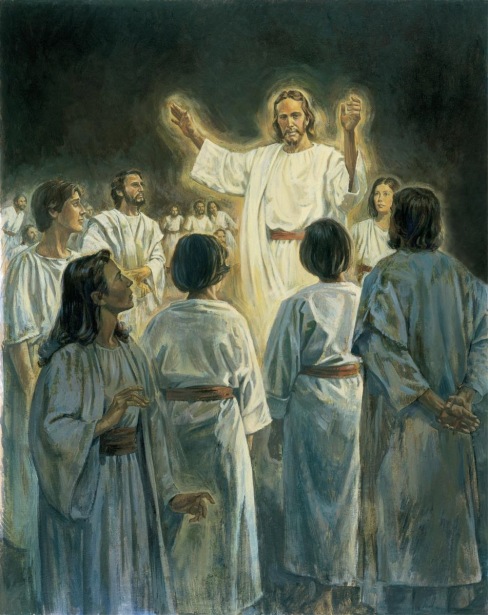 The second day on earth was still, disciples left behind,
were left to wonder how it was that man had been so blind,
to fail to see the miracles of Gods begotten son,
they crucified their only hope, The Lord, the Chosen One.

But though the battered body of our Lord lay in the tomb,
His spirit lifted from the confines of the little room,
And gathered with the other spirits in God’s paradise,
He taught that broken were the bands from evil’s deadly vice.

And all who’d follow Him would have the chance to be baptized,
For mercy, love and justice rule,  His law not compromised,
Three days in heaven’s paradise instructing all who’d died,
Before returning down to earth as He had prophesied.

This short time in paradise gave hope to countless souls,
creating need for those alive to bring into the fold,
their loved ones who had died without the knowledge of the Christ,
nor of His loving message of atoning sacrifice.

And now His temples dot the earth where veil is thin at times
Between the seen and unseen souls who truly follow Christ
And ancient are the blessing giv’n to all who enter there,
While rescuing those hopeful souls from endless dark despair

And by this link to fathers gone our hearts to them do turn,
And through the Spirit’s sealing power, their hearts to us return,
For all God’s children have the power of choice to follow Him,
Whether born in priesthood light, or circumstances grim.

For Christ enabled on that day, the worthy ones below,
To act in proxy, for the spirits who had come to know,
And then accepted gospel truths, but with no flesh and bone,
Could not fulfill the ordinance nor covenant on their own.

The third day was the brightest one, renewed in spirit’s fire,
For resurrected was our Lord, no longer He required,
Any mortal thing on earth, For He had conquered death,
Became the way, the truth, and life, for hope, he gave new breath.

The morning light on that third day had symbolized anew,
That light had overcome both dark and sorrow from the tomb.
And equal as the deepest pain from loss of God’s own Son,
Was hope and love and confidence for victory was won!

No longer would the chains of hell or death be absolute,
For Christ had Risn’ in perfect form, though marks in hand and foot,
Remained for all to feel and look with tears and trembling hands
Reminders of the pain he felt fulfilling Father’s plan.

His gift to us, without condition, none to be deprived,
Was that of immortality; if earned, Eternal life.
He conquered death by taking up His mortal body’s frame,
But now exalted, quickened, by the power in His name

Three days of mighty consequence in many different ways,
For dark they were before with storm, now lit with heavens rays
And all mankind will struggle to fulfill our hearts on earth,
Unless we follow Jesus Christ, The One who gives us worth.