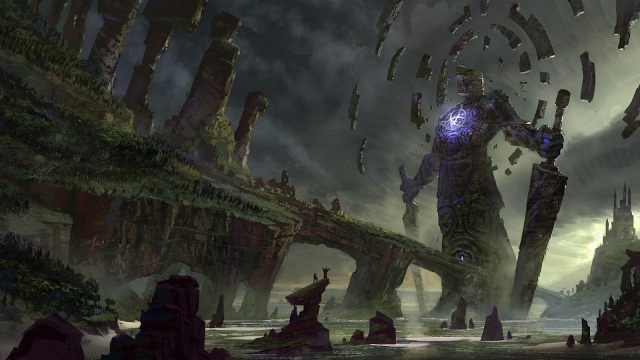 Manawa Arahi was third brother of the four,

Also scarred by heat and ash from life, in battle’s gore,

The distance far between the light from brothers inner flame,

The constant smoke and pressured ash from fire concealed the name,

Of his broad sword of massive build, a bulk of metal raw,

Constrained, and pressured by the mighty grip of dragon claw,

The mounting force applied to squeeze the life from him inside,

As mounds of earth, and ash, and rock above him were applied.

But take his life, it failed to do, this pressure from the mound,

It purified his heart, and righteous clarity was found,

Like diamond formed through pressured ages under mountain tall,

His core contained the light to fight, and lead against the gall.

As diamond formed within his heart, and strength within him grew,

He burst out from below the mound of rock and ash renewed!

The flying embers from the mountain built by dragon claw,

Disappeared when shone upon by sword without a flaw!

It’s size, it’s power, undenied, a beacon to be felt.

It’s writing glowed upon the hilt, in ancient written fire,

“Light from Darkness” it was named, it’s purpose to inspire.

Could only rise up, held by hands and faith and wisdom strong,

Undoubting strength was seen by all who witnessed its pure power,

A beacon raised, inspiring faith, and strength in battle’s hour

But when drawn out, its blinding light eliminated shade.

Which verified, confirmed, made true, the name inscribed thereon,

That light from darkness leads as beacon, mighty righteous throngs!

Not him alone within that mound of ash and rock and flame,

But shared, his life with loving wife, experience the same,

For power held within her strengthened him while under rock,

And triggered light to start the fight, to break the dragon’s lock!

Her light was bent, intensified, as if through prism walls,

His light, her light, within his heart expanding, making tall,

For diamond now his heart that leads, but not without her spark,

Her origin of godly light required to play his part.