In 1898 during the construction of a railroad in Eastern Africa, two rogue lions terrorized the construction workers that had been imported to complete the project for several months. These lions weren’t hunting for wildebeest, antelope, or any of their normal prey. They were hunting humans. The large tent camps where the workers were sleeping were prime targets largely because they were so poorly defended. These man-eating lions upended the workers lives. They worked, and slept in constant fear.

According to the records kept by the construction foreman, over 100 men were taken in just a few months. In panicked desperation, the workers hastily constructed thorn bush barriers, lit fires, slept in trees, and did whatever they could to stay safe from the two lions. The lions would come at night under the cover of darkness and were rarely seen until it was too late. Every moment of the workers lives was spent in constant worry and fear of the two rouge predators. Because of their elusive nature, these terrorizing lions became known as The Ghost, and The Darkness.

If we flash forward 122 years to 2020, we are dealing with our own modern day unseen version of a rogue lion. Albeit much smaller. The COVID-19 virus is an unseen force that is wreaking havoc all around us. We can seemingly do very little to protect ourselves from it. Normal barriers, made out of what we typically have available to us, just like the thorn bush walls, are insufficient. The only real way to stay safe is to to stay away from wherever it is, or, have the appropriate protection that is effective against this particular assailant. It has changed our way of life, effected our work, our schools, our routines, and our priorities.

For many of us, it has truly brought some darkness, confusion, and fear. This virus appears as a Ghost, and often leaves Darkness in its wake. Governments, leaders, and people all over are scrambling to find solutions to fight something so small it’s almost inconceivable.

The whole world economy has been shaken, and come to a halt by an organism 100 times smaller than a single bacterium. For being only 250 microns, it seems to have had a massively and inconceivably disproportionate effect on the market demand for one of the most imperative survival items known to man….toilet paper. Who saw that coming? You know its bad when even Costco can’t keep it in stock.

The hardest thing about fighting off a virus, or apparently, a rogue man eating lion, is that you simply cannot see it coming. You don’t know exactly where it is, you don’t know exactly how or even if you’ll run into it, or from who, or where it’s been, or where it’s going. It can be everywhere, or no where. How do you know exactly when to wear a mask, or wash your hands? When should we wear goggles, or a full on hazmat suit? How do you know exactly when to sleep in a tree, or stay awake til 4:00 am with a gun pointed at the opening in the thorn bush wall? You simply have to be ready, protected and prepared all the time. You cannot take a break.

I guess we could ask the ten virgins about all of this.

Their story in Mathew Chapter 25 tells of a wedding feast, and ten virgins were tasked with the oil lamp welcoming group for the Bridegroom. In those days, the Bridegroom would come to pick up his bride whenever he was able to care for her on his own. It was not a specifically designated time at all. The virgins would have to be ready for his arrival at any time. The parable tells of five foolish virgins that took lamps without any oil, assuming they would have time to fill them. The remaining five wise virgins kept oil in their lamps full and ready for the appearance of the awaited Bridegroom. 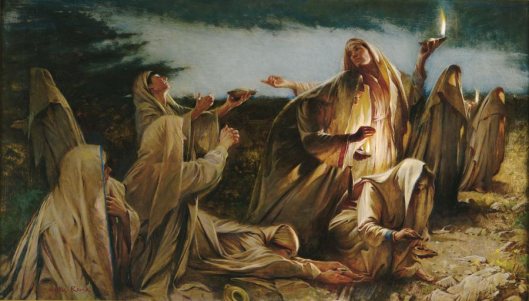 “Five of Them Were Wise” by Walter Rane

When the time finally came at midnight, and there was a “cry made¹” announcing that the arrival of the Bridegroom was near, the five which had not brought oil in their lamps, were now desperate. They scrambled and asked to borrow oil from those who were prepared. The wise virgins, earning their name, refused, claiming there wouldn’t be enough for all if they gave up their oil.

The Bridegroom came, and entered into the wedding feast at the very moment the foolish virgins had gone to purchase oil for their empty lamps. They missed it. When they finally arrived and knocked on the door and petitioned entrance, they were denied. The Lord, opening the door said, “Verily I say unto you, I know you not².”

Being ready and being prepared is the only thing we can do. If we wait to prepare until the Bridegroom turns the corner it will be too late. We may find ourselves on the outside of the party holding an empty lamp.

We can wait to put on protection until everyone else around us is sick, but we may develop a cough and a fever in the meantime.

We can sleep on the ground until the guy next to us is missing a limb from a middle-of-the-night lion attack, but we may suddenly and rudely be awakened by that same lion as he runs off with our left leg for his dinner.

The important thing about viruses, or bridegrooms, and maybe even lions, is that you need to be ready for them yesterday, not scrambling around the moment they appear. We need to be prepared, and ready, at all times. Even when no one else is. Sometimes, doing what is right may make us look silly and seemingly out of place in todays world, but it’s the only way to be safe.

So, what exactly are we preparing for? or preparing against?

In today’s world there are plenty of things that would keep us out of the wedding feast, or cause us to miss the return of our Savior. Continuous distractions, procrastination, immorality, pride, apathy and hate are just a few.

Preparing ourselves to be ready is taking all the precautions against whatever hidden lions lay outside waiting to attack in the darkness. It’s completely avoiding, or donning the most protective equipment available against a new deadly virus, or putting on the whole armor of God. It’s becoming more like the Savior and trying to keep his commandments and living by the precepts of His Gospel.

When we treat the threat of losing our spot in the Bridegroom’s wedding feast with he same urgency as we do from contracting COVID-19, or losing our limbs or lives to the Ghost and the Darkness, we are doing it right.

The real eternal threat to us today isn’t two rogue lions, or even a microscopic virus that causes a terrible disease. The most devastating threat is missing our opportunity to be with the Savior when he comes again. Can we even begin to bear the thought of our Savior saying to us, “I know you not²“?

Let’s treat our preparation for that wonderful event with the urgency it deserves. Our eternal survival and happiness depend on it.

To the End Enduring

When all the worldly Lions pace, and creep, in darkness waiting,
How do we escape their bite and ravenous attacking?

How do we survive an unseen foe as it is spreading
And preventing joined humanity once felt through our connecting?

Or, how do we prepare ourselves for wedding feast approaching,
So we can enter in with Him, to live in joyous feasting?

We fill our lamps, prepare ourselves, and others who are searching,
To find the peace, that in Christ lay, because of His atoning.

Believe in Him, and follow Him, fulfill his words proclaiming
To love our God, and neighbor both, while to the end enduring.