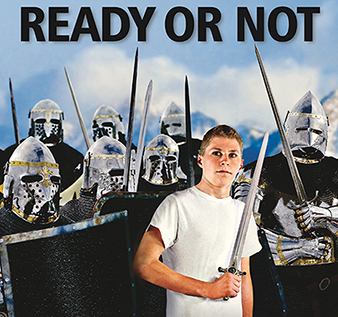 We have all heard and/or read a lot about equality lately, and the importance of making sure that everyone has an ‘equal chance’ for everything.  An equal chance at education, career opportunities, to have their voice heard, and to have rights or liberties or freedoms.  But I’d like to talk about a situation in which we actually want to discourage equal chances and encourage lopsidedness – and if we do it right – severe lopsidedness.

This situation happens to be an ongoing battle with the forces of evil, which ironically highlights in one sense the perfect case of equality, because forces on both sides of this battle are attempting with all their might to create the most severe cases of inequality imaginable in order to gain the victory.  In other words, neither side wants to create an ‘equal chance’ for fighting because each side wants a severely lopsided victory.  One side wants to save as many people as possible, and the other side wants as many casualties as possible.  There isn’t much room there for compromise – and if we don’t realize that – we need to.

There are many ways in which people can gain an advantage, in business, in sports, and in life.  For example, just this week I did something that I had been resisting for quite a while. I joined a triathlon club.  In fact, I joined a triathlon club with a very good reputation and track record with a lot of successful athletes (they had 7 athletes qualify for (and race in) the world championships in Kona this last month).  That’s impressive.  The reason for my hesitation has been primarily because I felt that it was the easy way out.  I thought it might be more admirable/impressive if I were to work hard on my own, improve on my own, and qualify for Kona on my own, because after all (in my mind), a tri club (this one in particular) seemed to create an unfair advantage for their athletes somehow removing the ‘equal chance’ for the rest of us due to their associations with vendors, bike fitters, coaches, and advisors.  In some strange way, my brain associated these athletes getting all the help they could possibly get in order to improve was somehow cheating.  I was (and still am most of the time) an idiot.

Luckily for me, the Book of Mormon is true, and it can prevent my idiot-ness from being permanent.

What I learned this week (helping me feel good about joining this club) is that captain Moroni had founded a triathlon club in the earlier years (about 72 BC) and that if you joined his club you weren’t cheating, you were giving yourself the best chance for improvement (and winning).  Just check out his coaching bio: “if all men had been, and were, and ever would be, like unto Moroni, behold, the very powers of hell would have been shaken forever; yea, the devil would never have power over the hearts of the children of men” (Alma 48:17).  And his bio doesn’t end there; the record goes on to show several case studies in how he had encouraged his people to prepare for battle in ‘in a manner which never had been known’ (Alma 49:8) – and win.

Now to be fair, there might have been some Nephites who thought to themselves “all of Moroni’s troops are cheating.  They are creating an unfair advantage over the Lamanites by joining his fight club with his extensive preparations and unknown manner of preparation and matching triathlon unitards (the title of liberty is definitely the Nephite tri club logo and the original basis for the current unitard design of today).  So, I’ll just work out my own preparation plan by doing the same things we’ve always done.”

Moroni teaches all of us how to create inequality in battle and it all starts with preparation.  Lots and lots and lots and lots (and lots) of preparation.  And he doesn’t stop – even in peaceful times – “Moroni did not stop making preparations for war, or to defend his people” (Alma 50:1).  As parents, we must build up heaps of earth round about all the city as the first line of defense.  Then we must create ‘works of timbers’ atop the heaps of earth.  Then we must build ‘frames of pickets’ atop the works of timbers.  After that, we must build a tower overlooking the picket.  Then, and only then can we create a place of security on top of the towers in which we can stand (nice and safe) and “cast stones from the top thereof, according to [our] pleasure and [our] strength” (Alma 50:5).

“Thus, Moroni did prepare strongholds against the coming of their enemies” (Alma 50:6).

“Thus, they were prepared… to smite down all who should attempt to come into their place of security” (Alma 49:20).

None of these guys in Moroni’s club were down on the ground fighting the Lamanites ‘on equal grounds’.  None of them.  And for that reason, “there was not a single soul of the Nephites which was slain” (Alma 49:23).

I think it is worth noting here, that the Lamanites tried their best and began to “dig down their banks of earth that they might obtain a pass to their armies, that they might have an equal chance to fight; but behold, in these attempts they were swept off by the stones and arrow which were thrown at them” (Alma 49:22).

We must create an absolutely lopsided battle fortifications for our kids.  We are charged (just like Moroni) in establishing a ‘place of security’.  And yes, it will take constant preparation.  We cannot allow the enemy to ‘obtain a pass’ to our army by any other way than the death trap we create – the front door – where we can see them coming from a mile away and where we have our strongest fortifications.  We cannot stop at the heaps of earth, or the timbers, or the pickets, or even the towers.  We need to create that place of security on top of all that which happens to be the most unequal chance possible for the enemy to win – just like we want.  We cannot think that by sending them out into the world on equal ground with the enemy is a show of good sportsmanship or that somehow that meeting the enemy head on will teach them good battle skills.  No – that will just get them injured, or worse – killed.

From our carefully crafted places of security we much teach our kids what the enemy looks like, sounds like, smells like, and feels like so that they are not surprised when they see them coming and so they can be ‘swept off’ by our stones and arrows thrown according to ‘our pleasure and our strength’ (not theirs).

We cannot be naïve or embarrassed about the plain, simple, and powerful doctrines that create our places of safety.  We cannot think that by building up heaps of earth, timbers, pickets, towers, and places of safety that we are guilty of offense, discrimination, or hate –because if you are busy down on the ground at the place of entrance apologizing for the towers and the pickets, you can’t see the enemy sneaking up as they come to destroy you.

Let us be like Moroni, who did labor exceedingly for the welfare and safety of his people… and who was firm in the faith of Christ” (Alma 48:12-13).

2 thoughts on “An equal chance to fight”