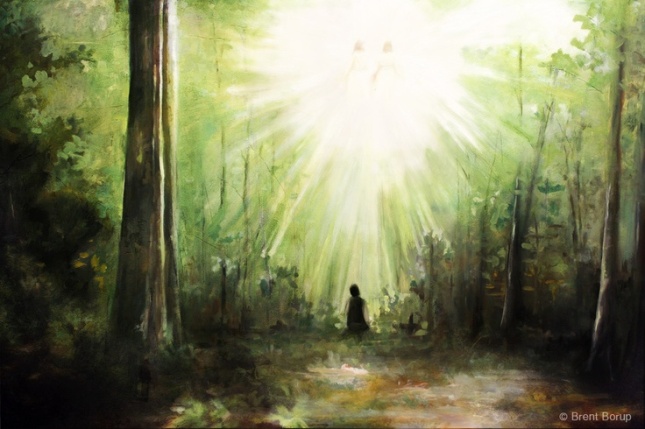 In this post, I think I should explain why it is that I write a lot of my thoughts down in poems. I never really thought I would ever do that, its just something that kind of happened. But, to me, poetry has an ability to enhance the visualization of the words on the page, or a way to better describe what it is I am trying to say. It elevates the sentiment. Im not saying that I am the next Edgar Allen Poe, or anyone special, but I do enjoy thinking, and visualizing these thoughts into verses that do those thoughts more justice than they would otherwise receive. Poetic words, in a way, almost paint a picture in my mind. I think that poetry or lyrics compromise at least half of the power of music. Take away the sounds of good music, and with just words, the power remains.

Parley P. Pratt (author of several hymns) wrote of a time when he was jailed together with Joseph in the Richmond Jail. Parley described their jailers as men “of the most noisy, foul-mouthed, vulgar, disgraceful rabble that ever defiled the earth”. He describes the event like this…

“In one of those tedious nights we had lain as if in sleep till the hour of midnight had passed, and our ears and hearts bad been pained, while we had listened for hours to the obscene jests, the horrid oaths, the dreadful blasphemies and filthy language of our guards, Colonel Price at their head, as they recounted to each other their deeds of rapine, murder, robbery, etc., which they had committed among the “Mormons” while at Far West and vicinity. They even boasted of defiling by force wives, daughters and virgins, and of shooting or dashing out the brains of men, women and children.
I had listened till I became so disgusted, shocked, horrified, and so filled with the spirit of indignant justice that I could scarcely refrain from rising upon my feet and rebuking the guards; but had said nothing to Joseph, or any one else, although I lay next to him and knew he was awake. On a sudden he arose to his feet, and spoke in a voice of thunder, or as the roaring lion, uttering, as near as I can recollect, the following words:

SILENCE, ye fiends of the infernal pit. In the name of Jesus Christ I rebuke you, and command you to be still; I will not live another minute and hear such language. Cease such talk, or you or I die THIS INSTANT!

He ceased to speak. He stood erect in terrible majesty. Chained, and without a weapon; calm, unruffled and dignified as an angel, he looked upon the quailing guards, whose weapons were lowered or dropped to the ground; whose knees smote together, and who, shrinking into a corner, or crouching at his feet, begged his pardon, and remained quiet till a change of guards.

I have seen the ministers of justice, clothed in magisterial robes, and criminals arraigned before them, while life was suspended on a breath, in the Courts of England; I have witnessed a Congress in solemn session to give laws to nations; I have tried to conceive of kings, of royal courts, of thrones and crowns; and of emperors assembled to decide the fate of kingdoms; but dignity and majesty have I seen but once, as it stood in chains, at midnight, in a dungeon in an obscure village of Missouri.

I love the picture in my head that comes as Parley describes the dignity of Joseph Smith.

Words can be so much more than just words. They can move us to feelings of loyalty, honor, indignation, courage, love, or reverence. Even better when those words describe something amazing.

To me, one of the most important events in the history of the world is the story of Joseph Smith and the first vision. It contains an immense inherent power that I feel each and every time I hear it, present it, think about it, or hear songs about it. It happened. There is no question.

So, I have written a few words to try and express my testimony of this event and of this man. I want my testimony to be public, on the record, etched in stone, so that there is no doubt as to where I stand. I want my kids to be able to look back at these words when I am gone, and draw strength from them. I look forward to the day that I can stand shoulder to shoulder with Joseph Smith, embrace him, and thank him for his immense personal sacrifice so that I, with my family, could enjoy the fullness of the blessings of God. I love him. I honor him, and I will praise him forever. God bless Brother Joseph.

A Light to End all Darkness

A blinding mist obscured the light that shone above the clouds,
While God withheld His lightning strike that soon would split the shroud-
A blanket o’er the world of man, no light therein allowed-
To see God’s purity and truth through apostatic cloud.

False men with lightless eyes proclaimed to own inspired sight,
while boasting truth within them lay interpretations right,
and damning those not joined with them to suffer hellish plight,
The snake had hissed his blinding mist that shaded God’s pure light.

But stifling darkness o’er the land could not disrupt the Mighty’s hand,
Inspired by whisp’ring spirit voice, a boy, obscure, was meant to stand.
The hosts of angels in the clouds of Heav’n knew the plan.
For God himself would bring the truth- restore to lightless land!

A darkened path seemed naught to be the will of loving God,
Whose prophets taught to follow him- to tread as He had trod,
While preaching mouths did honor Him, inside- their hearts lay flawed,
For bitterness and strife there dwelt, not fertile gospel sod.

This humble boy, confused by all the animosity,
Then read a verse in bible text, that promised he could see,
E’en for himself the truth unknown, if asked in faithful plea,
So on his knees, petition sent, in sacred grove of trees.

And as his mouth to heaven sent that soft and secret prayer,
The serpent came in power to arrest and bind him there,
With deepest black of darkest night, with fear beyond compare,
It overcame that humble boy now filled with deep despair.

His tongue was bound by serpent chains, and could not force a sound,
The overwhelming darkness held him prisoner on the ground
His soul, now on the precipice, black emptiness around,
Almost succumbed to evil’s grip, and helplessness profound.

But, in that very moment of his ultimate despair,
A light of magnitude n’er seen, descended from the air,
And settled on his feeble form, dispersed like lightning’s flare,
A brilliant beam of Heaven’s love and light beyond compare!

All black dispersed, with shrieking wail, in deferential flight,
as every creviced inch of earth was bathed in brilliant white!
And gone were feelings borne of him who’s mist obscured clear sight,
Replaced with overwhelming love- midday replaced the night!

All life then bowed before Creator of the Earth and skies!
Descending in pure majesty- The Father at his side!
The God of all the Universe! Perfected! Glorified!
Restoring revelation’s pow’r, the veil cleared from men’s eyes!

That young and humble, faithful boy, with trembling, shaking hands,
Had just beheld majestic glory of the Son of Man!
And now would rise as Prophet to restore the gospel plan,
To share! Declare! that truth returned to promised cov’nant lands!

The prophet Joseph then subjected to the serpent’s ire,
Would feel the whip, and feathered tar as wicked men conspired,
To snuff the light within him lit, and douse the gospel fire
With violent rage of blinded men, now minions of the liar!

Refined through lonely hours in prison, cold and suffering,
Illegalities unchecked, compounded winter’s sting,
His prayers sent up in sorrow’s bane did heav’nly comfort bring,
As Joseph’s faith through wind and fire became his offering.

Then willingly, to Carthage, midst the snarling mob of hell,
Who’s violent hate, and lawlessness had prov’n intent to quell,
The tidal wave of light o’reflowing from prophetic well,
That fed the flood that o’er the thirsting earth began to swell!

Now musket ball would end the hallowed life of that great man,
Fired from the coward’s rifle, by corrupted evil hands,
His brother Hyrum’s martyred blood would also stain that land,
And cry aloud for vengeance, while their testimonies stand!

This mighty man, the prophet dear, My Prophet still, he stands!
and mingles with the Gods above, yet still, for me, he plans,
And I shall know and see his face, embrace, and clasp his hands!
And I shall honor and revere- SHOUT praise to that great man! 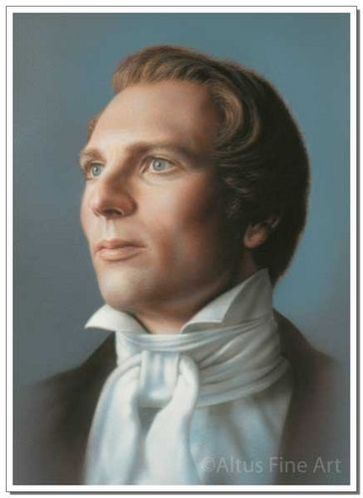 1 thought on “A Light to End All Darkness”